Expansive antitrust — a tool to cure all ills?

Antitrust at an inflection point

Antitrust has been flung into the spotlight in recent years as policymakers, enforcers and academics have debated whether years of perceived underenforcement have resulted in higher consumer prices, larger corporate profits, weaker small businesses, lower employee wages and greater income inequality. Initial studies suggested that US industries had grown increasingly concentrated in the absence of robust antitrust enforcement and that large companies had capitalized on their unchecked market power to extract increasing profits at the expense of consumers and workers. Critics of the status quo argued that antitrust had lost its way and that enforcers too often favored corporations over competition. While some evidence of these trends existed at the global level, the evidence was far more mixed and often showed more stable concentration levels in the EU and UK. This further fueled concerns that US enforcement was out of step.

Scholars responded by pointing out that the initial studies said little about competition because they measured concentration at broad sectoral levels rather than at product levels. Later studies sought to further undermine the popular narrative by showing that what in fact was occurring in the US economy was that businesses were embracing technology and innovation to gain scale and to expand geographically into a greater number of markets, leading to more efficient businesses and increased competition. While modest adjustments, such as increased funding for authorities might still be justified, these studies suggested that a wider overhaul of the antitrust laws was unwarranted.

But politicians and antitrust enforcers around the world nevertheless have signaled a need for bold action and have embraced calls to reinvigorate antitrust enforcement to address industrial and public policy concerns. Many also have advocated for using antitrust to tackle broader social and economic issues beyond consumer welfare, including income and racial inequality, the decline of small business and sustainability objectives. To the extent current antitrust tools are perceived as not up to the task, legislatures are also considering reforms that would give enforcers greater power to pursue their missions, particularly with respect to policing competition in the fast-paced digital economy.

Precisely how these changes will play out in the coming years will need to be seen. What is clear, however, is that antitrust is at an inflection point. No longer is the question whether antitrust will change but rather by how much.

The increased attention being given to competition policy globally is driving more frequent cooperation and exchange among key competition regulators seeking to enforce their laws vigorously. It will be increasingly important for businesses to match that coordination and to deliver clear and consistent narratives across all jurisdictions.

What to expect with a more ambitious enforcement agenda

Irrespective of any potential enhancement of their procedural tools, antitrust authorities around the world already have begun to implement more ambitious antitrust agendas that are certain to carry over into 2022. Enforcers are giving greater weight to concerns that traditionally have been lower priority. There is renewed interest in vertical mergers that combine companies at different levels of the supply chain (as opposed to deals between direct competitors).

Enforcers also have their eyes on practices that may eliminate nascent rivals that could offer disruptive new products and challenge incumbents if only given time to succeed. And while much of the public discourse clearly has been focused on pursuing a more activist antitrust enforcement agenda in the tech sector, healthcare, life sciences, agriculture and financial services are also squarely within the new antitrust crosshairs. 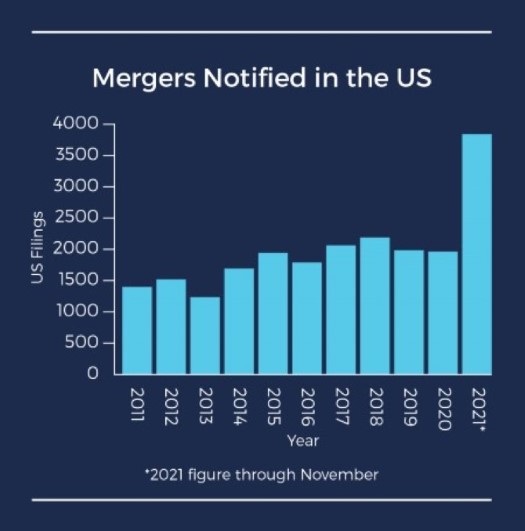 In the US, President Biden campaigned on a platform that promised more assertive antitrust enforcement. Since taking office, he has issued a sweeping Executive Order directing a “whole-of-government approach” to address “overconcentration, monopolization, and unfair competition.” He appointed reform-minded enforcers to lead the two US antitrust agencies. Both Lina Khan, the new Chair of the US Federal Trade Commission (FTC), and Jonathan Kanter, the new Assistant Attorney General of the Department of Justice (DOJ) Antitrust Division, signaled in their confirmation hearings an eagerness to enforce the antitrust laws more aggressively. The Biden Administration has started by shaking up the US merger review process with reforms to several long-standing procedural features. The FTC later announced it would significantly broaden its merger investigations to consider a much wider range of potential harms. The FTC also withdrew its support for the Vertical Mergers Guidelines, issued just one year prior, in part because the guidelines had a “flawed” view on merger efficiencies.

Shortly thereafter, the FTC filed suit to block Nvidia’s proposed $40bn acquisition of Arm, the second vertical transaction challenged by the Biden Administration in less than a year. In a similar development, the DOJ challenged Penguin Random House’s acquisition of rival publisher Simon & Schuster based on a novel labor monopsony theory that the transaction would harm authors. Increased enforcement in the US has not been limited to the merger space. The DOJ successfully defended its first criminal wage price-fixing case against a motion to dismiss. Meanwhile, the agencies have pursued high-profile monopolization cases in the healthcare and tech sectors. These trends are expected to continue into 2022.

We are witnessing the most significant change in US antitrust policy in the last 50 years. But while heightened scrutiny clearly requires companies to consider seriously the potential antitrust implications of their M&A activity and other strategic plans, we have seen that companies can successfully navigate these challenges with the right planning.

In the EU, the European Commission (EC) has reset expectations about its jurisdictional authority to review transactions it believes may harm competition. In September 2021, the EC opened an investigation into Illumina’s $7bn acquisition of Grail despite the fact that the transaction did not meet EU or Member State notification thresholds.

The European Commission is continuing to bolster and modernize its enforcement toolkit with a view to better addressing perceived market failures. Businesses should keep a close eye on these forthcoming changes in order to remain compliant with antitrust regulation.

Likewise, in its first year as a standalone competition regime following its departure from the EU, the UK has shown that it will continue to play a key role on the world competition stage. The CMA has quickly emerged as one the most assertive antitrust enforcers internationally. In particular, it has taken an increasingly expansive view of its jurisdictional authority to review transactions with limited or no connection to the UK.

Trends toward greater antitrust scrutiny extend also to China, where antitrust enforcement has moved higher on the government’s agenda. Urged on by President Xi, China’s SAMR has made headlines this year through more stringent enforcement, including record high fines and a prohibited transaction in the internet sector. China also officially launched a new National Anti-Monopoly Bureau in November 2021. The new agency houses three bureaus — two enforcement and one policy coordination with more than double the previous headcount — intended to help better police anti-monopoly conduct.

Several jurisdictions have introduced legislative proposals to strengthen antitrust enforcement. A slew of bills has been introduced in the US Congress in the last year. This includes legislation that would shift the burden of proof to the parties to show that their merger is not anticompetitive, increase merger notification filing fees to help fund the antitrust agencies and prevent tech companies from self-preferencing (see theme 4). In 2022, the European legislature is set to adopt the EU Digital Markets Act (DMA), which establishes certain obligations for online “gatekeepers” to help technology start-ups compete in the online platform environment.

In China, the most eye-catching reform has been the announcement of a second draft Amendment to the Anti-Monopoly Law. The draft seeks stronger penalties for violations, reforms to the merger control regime and further guidance on anticompetitive conduct, reflecting a firmer enforcement posture consistent with global trends. The Australian Competition and Consumer Commission is also consulting on significant proposed reforms, including changing its “voluntary” merger review regime to a “mandatory and suspensory” regime.

SAMR is boosting efforts to crack down anticompetitive practices. The establishment of a new enforcement body, expansion of the antitrust enforcement taskforce and the proposed increase of fines for antitrust violations continue to signal tougher enforcement in the years to come.

With thanks to Kailun Ji and Iris Zhou for their contributions to this theme.

How businesses should prepare for the future of antitrust

An opportunity to consider further the UK’s new rules for digital firms and their place in the wider reform jigsaw?