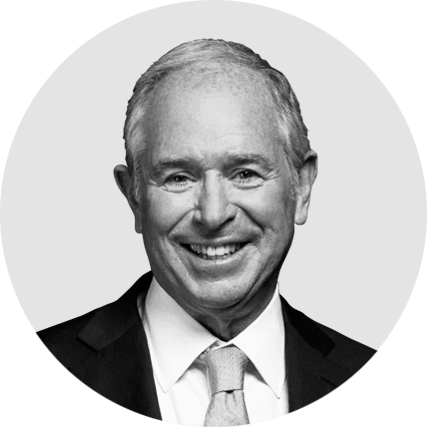 Stephen A. Schwarzman
Chairman, Chief Executive Officer and Co-Founder, The Blackstone Group
Stephen is Chairman, CEO and Co-Founder of Blackstone, a leading global investment firm with over $570 billion in AUM and businesses in private equity, real estate, hedge funds, credit, infrastructure and life sciences.
‍
In both business and philanthropy, he dedicates himself to tackling big problems with transformative solutions. His major gifts have helped establish a new center at the University of Oxford to redefine the study of the humanities for the 21st century, create a new college at MIT dedicated to the study of artificial intelligence, build a first-of-its-kind student center at Yale, renovate and expand the New York Public Library, and found an international fellowship program, Schwarzman Scholars, at Tsinghua University in Beijing to educate future leaders about China.
‍
Stephen is a member of the Council on Foreign Relations, Business Roundtable, and International Business Council of the WEF. He was named one of TIME’s “100 Most Influential People,” topped Forbes’ list of the most influential people in finance (2016), and ranked on Forbes’ Top 50 “World’s Most Powerful People” (2018). His honors include the Légion d'Honneur and Ordre des Arts et des Lettres from France, and Order of the Aztec Eagle from Mexico.
‍
In 2019, Stephen published his first book, What It Takes: Lessons in the Pursuit of Excellence, a New York Times best seller which draws on his experiences in business, philanthropy, and public service.